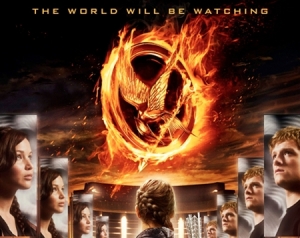 As a fan of The Hunger Games trilogy I was ecstatic when I heard the books would be brought to film. Fast-forward through the months of waiting, and I finally found myself jammed into a sold-out theatre for the midnight premier. (Side note: I usually get to films early to get a good seat, but I’ve never gone an hour and fifteen minutes early; regardless of that fact, I found the theatre already packed.) I found a mix of enthusiastic fans who had devoured the books like me, others who had only read Book 1, and still others who had no idea what was in store. It was highly entertaining to say the least.

Now on to the movie – I was a bit worried how the book-to-film-adapation would translate, but the story came off brilliantly for me. I tried to watch as a person who had no knowledge of the film outside of the movie itself. The script writers did a great job of providing enough integral details to fill in the gaps that normally occur when cramming an entire book a film.

For those of you unfamiliar with the plot, The Hunger Games is set in a future “post-war” type setting. Twelve Districts live under the totalitarian rule of The Capitol. To remind the Districts of who’s in charge, each year one boy and one girl between the ages of 12-18 are chosen as Tributes from each District to participate in The Hunger Games – a fight to the death where only one Tribute can emerge as victor. Needless to say, this plot lends itself to a whole plethora of violence. The film manages to hold on to its PG-13 rating by muting sounds effects, cutting away, and inferring rather than showing the violence. All that being said, there’s still some rather harsh scenes, due more to the fact that the violence is propagated by such young kids, rather than the gratuitousness of its nature.

The protagonist of the books is Katniss Everdeen. Jennifer Lawrence shoulders this role and carries the entire film with a smouldering presence that begs you to root for her. She was a fantastic choice, and she shows some outstanding acting chops. Nothing but a bright future ahead for her. Josh Hutcherson plays Peeta Mellark, the boy Tribute from Katniss’ home District. I’ve heard some reviews that take issue with his acting, but after reading the books you have to understand that he’s supposed to come across as more of an introvert, not as brash or caustic as Katniss. He’s not supposed to “power the scenes away from her.” She really is the focal point, and I felt like Hutcherson carried his role well. If people have issues with the perceived chemistry that’s built through the film, I recommend reading the books. There are so many nuances and circumstances between Katniss and Peeta that just can’t all be shown on film. Gary Ross helmed the film, and I really enjoyed his directing. He uses a blend of stable shots and “shaky cam” to keep it interesting. Shot on location in NC, the scenery is beautiful and Ross conveys such a stark portrayal between the different worlds of the Districts and the Capitol.

Overall, I was really pleased with the film. Already knowing the plot, I knew that the end of the film would have a bit of a “let down” feeling due to the fact that Books 1 and 2 basically run right into each other. I know fans everywhere (myself included), will be anxiously waiting to hear when Catching Fire will be released.